Digital natives don’t have anything on these gen-xers and boomers who crafted new careers with social media savvy, storytelling chops and a dynamic approach to reinvention.

Don’t dismiss these stories – there is something valuable to take away from each of them.

From Fast Company by Lydia Dishman

“Around these parts, we like to celebrate creative people. And we stand up and cheer for (and hire!) people like Natalia Rodriguez, whose tweets and blog landed her an internship at Fast Company.

So is traditional job recruiting dead? Not totally. But it may be on life support. New data from Jobvite, an online recruiting platform, found that 94% of recruiters are using or plan to use social media to find qualified candidates. More than three-quarters (78%) have already made a hire through social media.

We’ve previously noted how a well-placed, expertly crafted 140 characters can open the door to a dream job. YouTube, GitHub, Stackoverflow, Yammer, and Instagram are also emerging as channels that recruiters use to source talent.

While most digitally native millennials like Rodriguez flex easily between Facebooking their friends and tweeting for professional purposes, those over age 40 who started their electronic correspondence on plug-in typewriters might think they’re at a disadvantage. Not so. Fast Company rounded up a few gen-Xers and Boomers who’ve not only found work through a clever use of social channels, they’ve actually transitioned into them from totally unrelated careers. Read on for their inspiring tales of transformation.

The Social Butterfly
Back in 2008, Kay Roseland found herself unemployed along with thousands of other workers whose jobs were casualties of the recession. Unlike many of them, the former merchandise analyst for an online retailer was over 60 and closer to retirement than a new chapter. Roseland simply looked at being laid off as an opportunity to learn something new.

“I knew zero about social media in 2008. I now have 2 certifications in social media,” she tells Fast Company. “When in doubt, go to school.”

While Roseland was getting comfortable tweeting and using LinkedIn, she also started a blog called Shareology the following year. Roseland says that while she can’t recall tweeting directly to a hiring manager, she does credit using all the channels to score her next gig.

I attended a Saturday event called Product Camp. I volunteered to help collate the goodie bags at 7 a.m. It was held at the Minneapolis campus of the University of St. Thomas where I received my MBA about five months before my layoff. I noticed a woman was speaking on social media who was leading the goodie bag collation, and I made it a point to attend her social media session. The rest is straight-from-the-book networking:
-I connected with her on LinkedIn.
-I invited her to coffee at a time and place convenient for her.
Two months later in January, I was standing on the front steps of the James J. Hill library and actually looking at her office building, freezing to death and waiting for the research library to open when I got an email from [this person] asking if I would be interested in working for her boss. They had always wanted to start a blog for the group and had never gotten it done. I got hired to make that happen.

At age 64, Roseland was hired to blog for Infor–the company that astute readers may remember as the world’s largest startup. She now mentors her boss, the vice president of product management, on how to use Twitter and be more social.

Never Underestimate the Power of Email
Back in 2004, Gail Dosik didn’t have the benefit of knowing the nine deadly sins of email. At 50, this veteran of the fashion industry has just traded designer shoes for an apron and a chef’s toque at culinary school. Getting a job was another story.

“I knew I was too old to work on a restaurant line and I always wanted my own business,” she tells Fast Company. So she started One Tough Cookie, a Manhattan-based gourmet bakery. Even though she was in a completely new milieu, Dosik knew she had to drum up customers.

“The boldest move I made was to send an email and some photos to [the now defunct] Urban Baby and got a write-up from them,” Dosik recalls.  She spent the rest of that day in her pajamas fielding a flood of phone calls and emails.

As time went on, Dosik turned to social media to grow the business. Though she never got far on Myspace, she immediately latched on to Twitter. “It gave me (a) community, (b) introduced me to so many wonderful people I call friends in real life now, and (c) is a fabulous vehicle for promotion. Instagram, too, has been incredible for building business,” she asserts. Dosik also has a number of how-to videos on YouTube.

For Dosik, it’s more than promotion. “Social media totally keeps you young, hip, and happening. I’ve been interviewed a lot from people who’ve found me on Twitter.  Many thought I was in their age range and were shocked when I told them I could be their grandma.”

I Got Sued By Facebook
Diane Danielson’s story begins before she turned 40. As an attorney, she had no experience with technology but all that changed when she pivoted to take a job in marketing. “I started to see you can’t ignore this website and email thing,” she tells Fast Company. Though she managed to launch the company’s first website, Danielson eventually left marketing behind when the Boston Globe asked her to blog for them. “I had no idea what a blog was but I learned to say yes, sure.”

Along with that, she was running the Downtown Women’s Club, a peer mentoring and networking group in Boston. Danielson started thinking it would be great if the group had an online directory where members could upload their own photos and information and also show who else they knew in the group. Sound familiar? “Well this was in 2005 and we started hearing about this Facebook thing out of Harvard,” recalls Danielson. In keeping with the paper student “facebook” registers of yore, Danielson gave her own online network the same name, but had to stop when Zuckerberg and company asked them to change it.

Danielson continued to forge a path using existing channels as they became available. “I was on Twitter before Ashton Kutcher,” she wisecracks, recalling that there was an app that used to verify if you joined the platform before he did. She also took classes at Code Academy. Though she wasn’t looking for work, keeping her online profiles easily searchable eventually led her current company, the commercial real estate franchiser Sperry Van Ness International Corporation, to come calling. “They wanted someone who did social media and real estate and I was the only one who came up,” she explains. Danielson is now second in command behind the CEO.

The Little Blog That Could
Mike Levine always loved trucks. So when he graduated from college with a degree in finance, he promptly got a job in IT at IBM but also started a blog to share stories with other pickup truck enthusiasts.

“We received funding in 1999–right before the dotcom bust–so I was full time on it for two years but had to go back to software development at Visa in 2001 to make ends meet,” he tells Fast Company.

It would be six years before Levine could get back to his passion project full-time. The site was acquired in 2008 by Classified Ventures/Cars.com, but Levine wasn’t left alone for long. His site had captured the attention of the folks at Ford, and he was offered a position in 2011 managing Ford Truck Communications for North America. 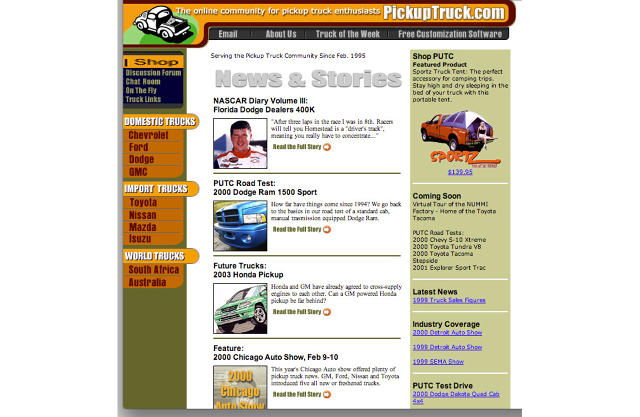 Storytelling is Always a Desirable Skill

What would a classically trained anthropologist have to offer semiconductor chip maker Intel? Plenty, it turns out. It’s all how you frame it.

Todd S. Harple is an anthropologist with museum training who did fieldwork for his PhD on the west side of New Guinea. His first job after earning his doctorate degree was on a museum project at Harley-Davidson .

After world politics (the 2002 bombing in Bali) stopped further work in Harple’s chosen field, he had to reinvent himself. “The combination of Monster.com and a hiring manager whose mother did a PhD at the Australian National University helped,” Harple tells Fast Company.

“I recall my job talk being framed like Forrest Gump,” he explains. “I’d been to strange places, met influential people, and heard all sorts of stories. The nub of my interview/job talk was about storytelling and how people express values via stories.”

Eight years and a promotion later, Harple is still at Intel as experience engineer for new devices innovation.